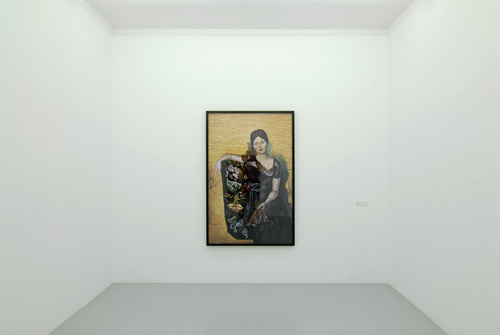 The Brazilian artist Vik Muniz, mostly known for his eccentric reproductions of famous works of art, is presenting his new series of seven renowned Picasso female portraits, created in his own unique style.
In this new body of work, shown for the first time at the Xippas Gallery from September 27 to November 24, Muniz moves on to the use of painting’s most primary material, the pigment, by leaving behind all the unusual media he had employed in the past (granulated sugar, tomato sauce, chocolate syrup, sewing thread, dust, soil, cigarette ash etc). This choice brings the process of re-materialization to its climax, as the original painting, reduced in our conscience to a mental image, regains its material dimension and stimulates our senses.
In Dora Maar, Weeping Woman, Jacqueline, Olga, Woman with fan, The Dream, Bust of a Woman, after Picasso, Muniz “suspends” the original work by creating an artificial reproduction which raises once again the issue of visual perception. Misleading the viewers, by providing them with a familiar but eventually “false” image, is intentional, aimed at activating their ability to react against the automatic assimilation of any kind of visual information.