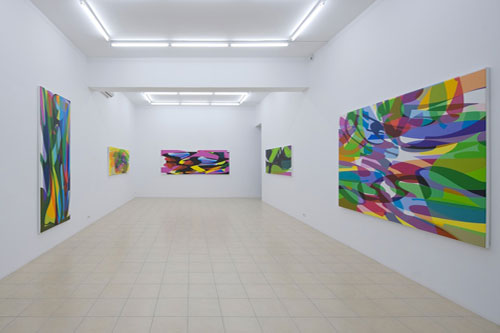 Although in his paintings he employs a decidedly abstract language, Yves Oppenheim follows the path of experimentation and innovation, playing with repetition, variation and resumption. With his complex composition, precise gestures and conscious use of color, Oppenheim places himself within the traditional framework of painting on the one hand, while on the other hand puts this very context into question through continuous dissolution and reconstruction of his compositions.
For his second solo exhibition at Xippas Gallery in Athens, Oppenheim presents an ensemble of recent large-scale paintings; while motif and background assume alternate roles, stratification becomes more intense as a result of the increasing fragmentation and dispersion of shapes in which a trace of shadow is added. Consequently, the impression of three-dimensionality emerges enhanced. As the “routes” proposed by Oppenheim assume a labyrinth-like form, the mobility and complexity of his shapes gain momentum and lead to an absolute increase in the works’ intensity, impacting directly on the spectator’s internal balance which is disrupted through the dissolution of any visual coherence. Finally, the presence of verticality appears accentuated in relation to the horizontal layout of previous units.

Superimposed forms, interlaced and transparent, depict the successive constructions and deconstructions that constitute the painting, thereby putting into question the making of the pictures. The gestures of invalidating, of re-covering the surface and of starting over are characteristic for Oppenheim’s work. They focus on the very act of painting and at the same time prohibit an immediate understanding of the work. According to Oppenheim “making the spectator aware of the artistic activity itself is central. The work should intentionally undermine any effort to quickly and simply understand what is depicted; on the contrary, by disquieting the viewer, it should provoke a process of reflection and analysis.”

Yves Oppenheim lives and works in Berlin. Leading museums such as the ARC, the Paris Museum of Modern Art (1988), the Nantes Museum of Fine Arts, the Contemporary Art Center of Domaine de Kerguèhennec (1998), as well as the Fine Arts Museum in Gap (2000),have hosted his solo exhibitions. His work is part of the prestigious collections of the Centre Georges Pompidou, the Paris Museum of Modern Art and the Carré d’Art in Nîmes. Οppenheim has had exhibitions in Germany at the Μax Ηetzler Gallery (2001, 2003, 2004, 2006, 2009), in France at the Xippas Gallery (2006) and in Belgium at the Xavier Hufkens Gallery (2005).