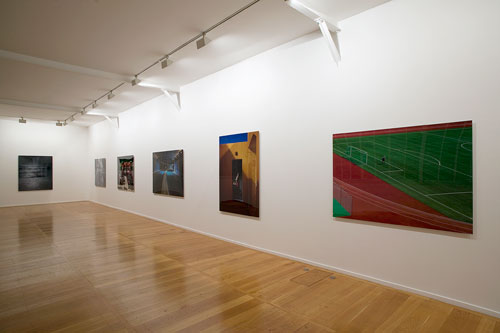 Panos Kokkinias deals in his photographs with man’s relationship to the world around him and the self within. He searches for forms in which the existential question becomes manifest in contemporary reality and for ways in which these forms may be recorded by means of photography.
The focus of his work shifts between the disruptions that beset man’s relationship to his origins and to nature, and man’s inability to comprehend his provenance and identity from his place inside an environment that is of his own making – the city.

The distinctive features of his photographic work – a staging of the image, descriptive detail achieved through depth of field, clarity of composition, an emphasis on colour and a preference for large-scale work – are the result of choices made so that specific needs may be met: playing down as much as possible all that attests to photography’s mediating role, so that attention may centre on that which is being represented; ultimately allowing, through accurate description, for reality itself to be transcended.

In his solo exhibition at Xippas Gallery in Athens, Kokkinias presents a new series of ten large-scale photographs titled Visitors. These lonely visitors, immobilized in the moment, or trapped in endless anticipation, seem to be hovering in a space that lies somewhere between intention and action, held captive in a state of suspended movement. Strangers to the space they find themselves in and, more importantly, to themselves, they are at once passing from and caused to stand transfixed in this no-man’s-land between the ephemeral and eternity.

At the same time, the exhibition features new works from the Landscapes series, which is a series in progress. In it, the enduring state of discord between man and nature is confronted with a sense of irony and humour.
Panos Kokkinias was born in 1965, in Athens, where he now lives and works.

In 2006 his work was included in Vitamin Ph, a Phaidon Press publication featuring a selection of works from the international scene of contemporary photography.