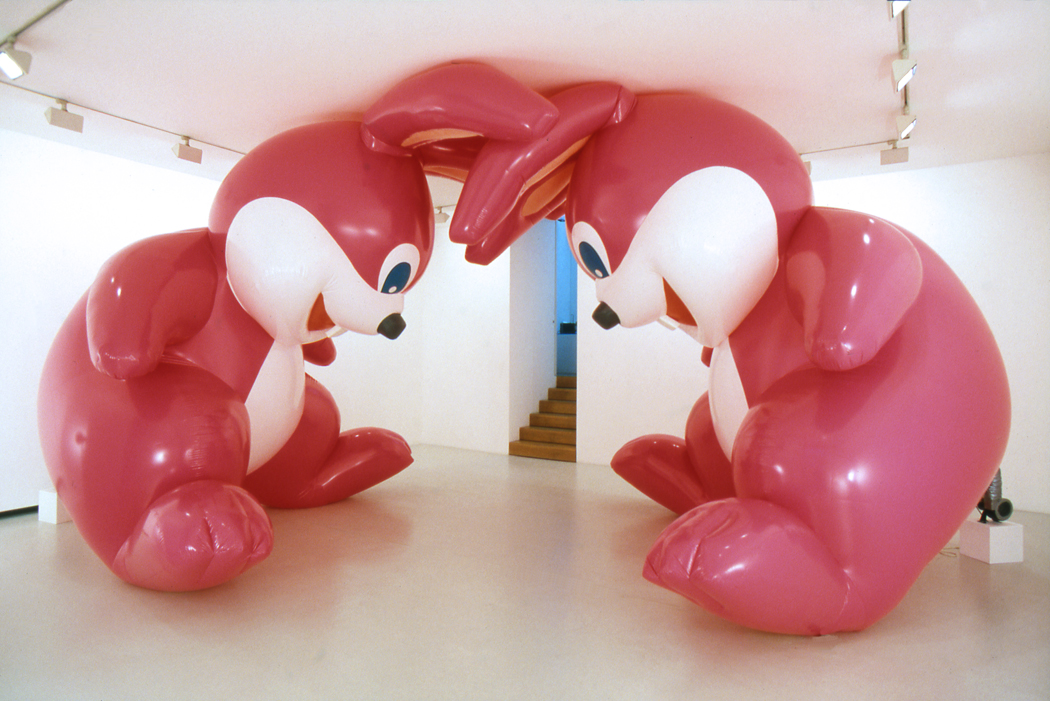 Galerie Xippas is pleased to announce an exhibition by the Japanese scultpure and performance artist Momoyo Torimitsu opening September 9 and running through October 21, 2000. This will be the artist’s first one-person exhibition in France. Entitled “Somehow I don’t feel comfortable”, Momoyo Torimitsu creates an installation of two large-scale balloon rabbits clamped between ceiling and floor that will fill the entire space of the first floor at Galerie Xippas. For the artist, the image of a rabbit is a cliché in East Asia of cute innocence from adolescent childhood and growing-up in Tokyo which remains today in the consciousness of adults.
The over-sized scale shows the cramped feeling of a person who can no longer distinguish mental and physical freedom. The size also creates a bizarre sentiment; oppressive and even monstrous.

The result of the human condition living in urban cities is a theme in the work of Momoyo Torimitsu. The borderlines and the limits of possibilities are both stretched and exaggerated and the question of protecting one’s space becomes a dominate issue to day to day living. Personal territory in our cyber society is expanding at a rapid pace that one feels broken from reality. This installation focuses on our daily life. The artist continues to explore the period of post 1960’s Japan after the high growth economic transformation that reflects her culture, characterized by technology, media, and entertainment.
Momoyo Torimitsu was born in Tokyo in 1967 where she graduated from Tama Art University. She lives and works in New York since 1996 at which time she was a resident in the International Studio Program at P.S.1. She has had solo-exhibitions at Gallery MYU, Tokyo (1994, 1995 ,1996) and Deitch Projects (January 2000). She was included in the international group exhibition Abracadbra at The Tate Gallery, London, The Best of the Season 1999 at The Aldrich Museum of Contemporary Art, Connecticut, and Videodrome at The New Museum of Contemporary Art, New York. Recently she particpated in Dark Mirrors of Japan at De Appel, Amsterdam and From Distance at Galerie Almine Rech, Paris.