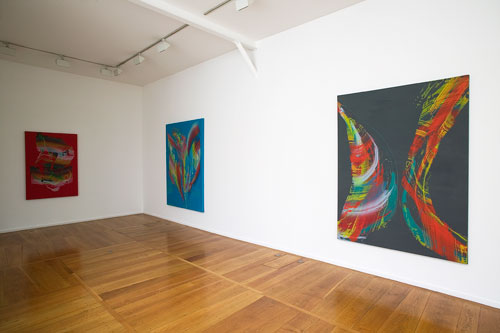 José Manuel Broto, born in 1949 in Saragossa, Spain, is considered today one of the foremost representatives of the Spanish contemporary art scene. His early constructivism (1968) was quickly replaced by abstraction (1972), to which he remains faithful to this day.
The abstract minimalism of his early ’80s work evolved, towards the end of the decade, into abstract expressionism, with the incorporation into his paintings of stimuli taken from landscapes, and is reminiscent of nature in its most primitive manifestation. His relocation from Barcelona to Paris in 1985, where he lives and works to this day, coincides with the substitution of his romantic subjects by more austere and abstract forms.

From the late ’90s onwards, new subjects, such as space-like figures and transparent atmospheric shapes, have been added to Broto’s usual forms of dream-like figures, geometric shapes, labyrinths and organic forms. The intense spiritual and symbolic charge of the works seems to pave the way for rhythm and ‘syntax’. The division of colour on the surface often gives way to a single colour field, while the shapes acquire an enigmatic quality. At his first solo exhibition at the Xippas Gallery in Athens, Broto will be presenting his most recent works, made in 2007.

Broto’s passion for exploration has pushed him to take advantage of all the opportunities offered by the entire range of modern techniques and materials (the computer functions as the primary tool of study in his work). His rejection of established solutions has led him to a perpetual renewal of shapes and colour in his compositions. Free from any affected rhetoric, full of symbolic and expressive power, his works constitute a point of reference for many younger artists, as well as forming part of the largest private and public, national and international collections.
In 1995 Broto was awarded the National Fine Arts Award by Spain’s Ministry of Culture, and in 1997, the Special Award of the ARCO committee in Madrid. In 1996 the Centro de Arte Reina Sofia in Madrid held a retrospective exhibition of his works from the last ten years, and in 2004 the Department of Cultural and Scientific Relations of Spain’s Foreign Ministry, organised a travelling exhibition that later moved to Chile, Mexico and Uruguay. Broto has had solo exhibitions in many cities of Spain, as well as in France, Holland, Italy, Argentina, Venezuela etc. and has taken part in countless group exhibitions.