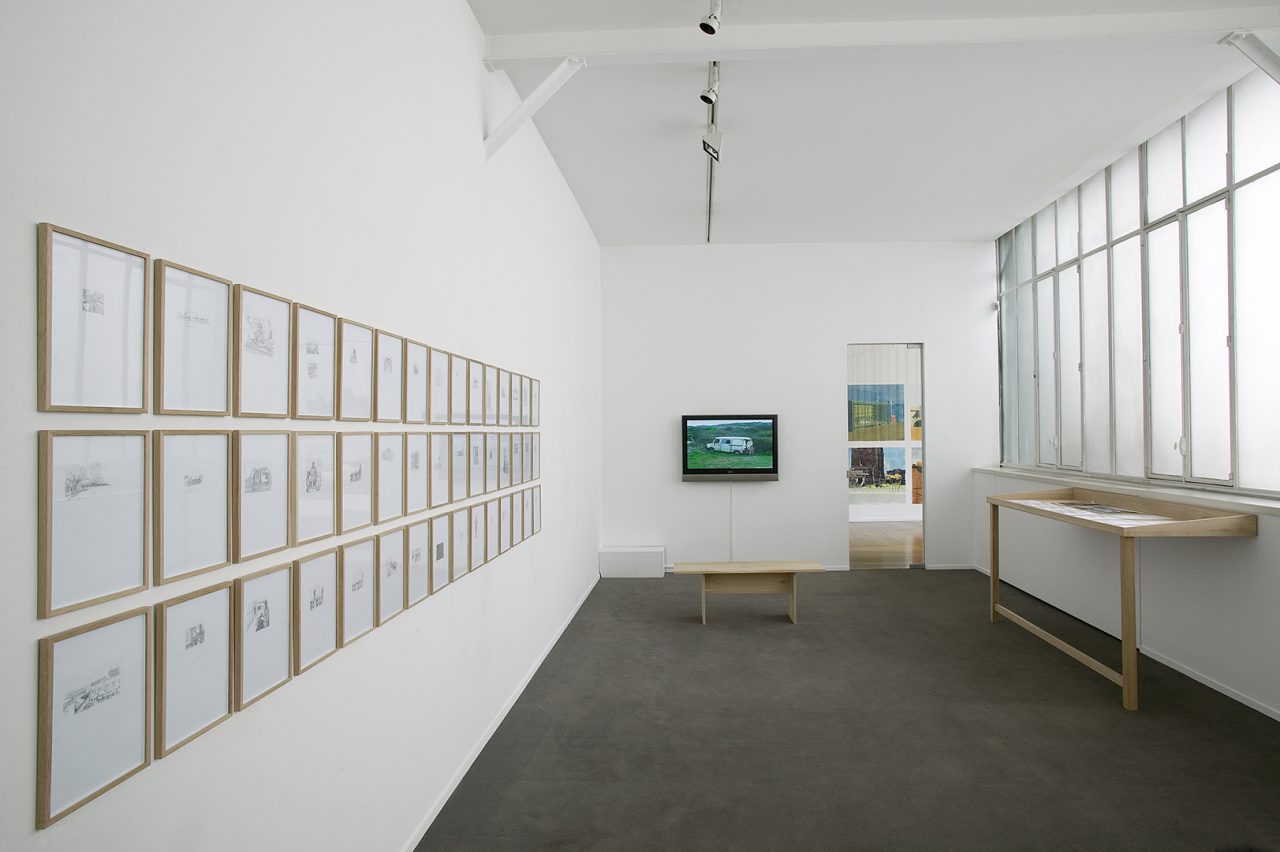 Expressing himself through mediums as diverse as drawing, video and performance, Jorge Satorre creates an oeuvre that places actions and the processes of creation in the foreground. Centred on complex investigative procedures, actions, narrations and voyages are staged in such a way as to allow for a return to the way things were at the beginning of the process, leaving only a trace of the event remaining.
The title of Jorge Satorre’s first exhibition at the Gallery Xippas is taken from Herman Melville’s novel The Happy Failure, written in 1854. The protagonist of the story, failing in an endeavour despite his very best efforts, reacts in a startling way when faced with such colossal disappointment. The author’s absurd vision serves as a reference for the motifs from which the present works arose.

In The Barry’s Van Tour, Jorge Satorre conceived an intervention that dialogued with the local history of the Isle of Sherkin, situated to the west of Cork in Ireland. After several investigations and visits to the island, Jorge Satorre noticed the presence of a vehicle that had been abandoned for many years and never moved. A veritable monument, the van belonged to a young fisherman deceased five years earlier. None of the objects in the vehicle had since been touched. Only the effects of time seemed to have transformed the scene, eroding the material and metamorphosing the landscape. Drawing from this story, and with the acquiescence of the local inhabitants, the artist proposed to restore the vehicle. Transported by truck and by boat in order for it to be repaired at the nearest garage, then returned to its original site, Barry’s van definitively acquired the status of a monument.
During the process Jorge Satorre created several works, including a video and drawings, all destined to document its evolution. In this way, the artist gives new life to the myth associated with the vehicle and creates a work whose results embody only the visible processes; the energy used to stage the event, the relationships made with the inhabitants of the island and the words exchanged are all concealed.

The creation of the second work, National Balloon, is based on Chris Burden’s mythical performance “Shoot”. The 19th of November 1971 at the F-Space Gallery in Santa Ana, California, Burden was purposefully shot in the arm with a .22 calibre handgun. Few witnessed the scene, and of the performance only an eight second recording and a few photographs remain – the story has been spread mostly by word of mouth. By retracing this event, Jorge Satorre explores ways by which he can symbolically overcome his position as an absent spectator.
Jorge Satorre’s initial objective for the project was to converse with Burden. The latter’s reluctance compelled Satorre to slowly widen his approach to understand all the proceedings and negotiations that took place in order to convince Burden to allow for this meeting to take place. Researches into the people connected to the story, the gathering of relevant information and visits to significant places became the principal components of the work. National Balloon is not solely based on “Shoot”, but on its diverse consequences, the interpretations it generated, and the subsequent answers these interpretations received.

National Balloon is the name of a company that prints and sells balloons, that now occupies what was formerly the F-Space Gallery.

The documents that have resulted from this experience comprise of several photographs taken on a visit of the National Balloon company, and a selection of 45 drawings of places, memories, interpretations, conversations and people involved in the project. The images do not pretend to tell a linear story; they subjectively document the experience of a concrete event.

Jorge Satorre was born in Mexico City. He lives and works in Paris and is presently in residence at the pavilion in the Palais de Tokyo.