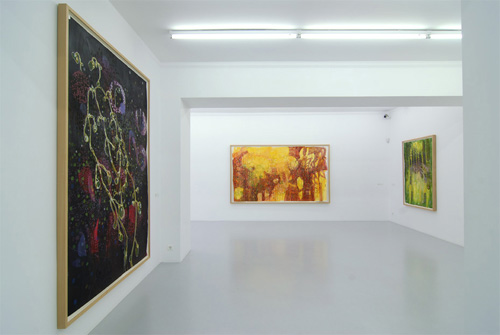 Janaina Tschape is presenting for the first time in Greece at the Xippas Gallery from September 27 to November 24, recent drawings of 2007 and photographs of the Melantropics series (2005-2006).
The title is a reference to the crisis of melancholy that broke out in Brazil at the end of the 19th century. The botanical garden of St. Louis, Missouri, and the tropical flora of the Brazilian Parque Lage in Rio de Janeiro, provides the scene for Tshape’s images. Her protagonists, young women dressed in biomorphic costumes with latex or inflated fabric appendages, interact with balloons filled with helium or with textile creations which appear to be extensions of their bodies. The human substance retreats under the weight of these artificial accessories transforming the protagonists into hybrid beings, ambiguous creatures which, by transcending the limits of nature, mutate in anthropomorphic objects.
The photographs resulting from the artist’s actions seem to be fleeting visions of fairy-tale worlds, where, amidst a queer atmosphere and orgiastic vegetation, dream-like creatures, flower-nymphs, lonely and melancholic beings dwell, obeying the rules dictated by Janaina Tschape’s imaginary reality, fraught with legends and myths.