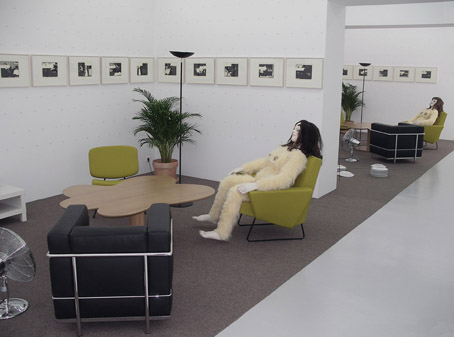 Are works of art ever truly finalized? The answer that Denis Savary appears to be giving through his works is no – everything is in a state of constant fermentation.
Having as his main objective the establishment of an “interactive” relationship between his works and the space that hosts them, Savary makes interventions rather than exhibitions in the conventional sense of the term. The space and the works end up mutually defining each other and thus renewing their identity.

At the same time, the history of art is approached anew and redefined through a novel reading. Memories resurface and incidents are re-experienced, gaining a new character. Nothing is any longer suppressed and nothing remains static.

Οnce again we find ourselves surprised before Alma, Oskar Kokoschka’s muse and mistress but also fetish doll, Félix Vallotton’s black and white woodcuts, Luc Andrié’s self-portraits as well as a multitude of other works containing numerous references to eminent artists, along with Savary’s contemporary “guests”, all seen from his personal angle. There is always a perceptible, specific difference that separates Savary’s works from the originals.

At his first solo exhibition in Athens, Savary invites the viewer to play with him and find the seven differences that distinguish the two identical show-rooms he created in the gallery, along with a series of 120 drawings, a video animation, a sound installation and some surprise works we are not aware of yet!