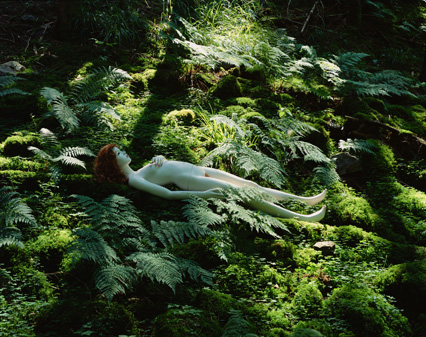 The work of Zelda Georgel stands on the verge between fantasy and reality. Nature, sometimes as dark, orgiastic vegetation, sometimes as a lucid, abandoned landscape, sequesters the whole scene, while an intruding naked female figure demands attention, at the same time inspiring and provoking. Self-confident and desirable, fully embodying all traits of femininity, refusing to submit to the restrictions imposed by its artificial nature, a mannequin, stars comfortably and gracefully in all of Zelda Georgel’s photographs.
Resonances, illusions and fears haunt Georgel’s dream-like environments. Life and death, truth and lies, dream and reality, conformity and transgression are all involved in her photographs. They produce an intense visual effect and an immediate impact on the viewer’s psyche, confirming that the falsification and copying of reality often constitute more potent sensory stimuli and generate emotions of greater intensity than those stemming from the authentic and real.

The static and often claustrophobic atmosphere of Georgel’s photographs will also be duplicated in the monochromatic forest she will create in a container: vegetation, humidity, penumbra, lack of colours and limited view all push the viewer to the same game of truth and lies, life and death.