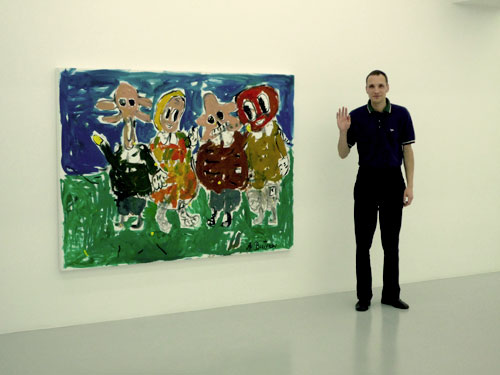 The seeming structural anarchy facing the viewer on his first contact with Butzer’s work, in which cartoon-like figures and geometric motifs are crammed within a pandemonium of bright colours, gradually recedes and the initial suspicion of the existence of a purely personal vocabulary turns progressively into certainty: bodyless floating faces, abstract figures sharing common morphological characteristics and nearly shapeless forms – the protagonists of each work – are all alluding to a cartoon.
They are the inhabitants of the same imaginary planet, Nasaheim (a name made up from NASA and the Californian city of Anaheim, home of Disneyland), and often members of the same tribe, like the man with stretched out cheeks and black holes instead of eyes or the blonde woman and the black cat.
Butzer’s peculiar characters with their huge black holes instead of eyes, mouths agape and ready to scream, slackly hanging hands and feet, emerge through thick brush strokes and numerous layers of colour. They seem to have escaped from an idiosyncratic Halloween, vacillating between morbidity and tenderness, evoking feelings ranging from affection to horror.

Definitely emblematic, these figures are the products of a personally created mass culture, which pushes deformity to an extreme under the thrust of dozens of allusions. From the history of art to the history of states, from Munch, Pollock, Baselitz to the national-socialism of the “SS” and from Siemens to Walt Disney, Butzer makes countless references to American and German history, contemporary politics and political history, economics and social hierarchy, the entertainment industry, technology, science fiction.

In Butzer’s more abstract works, the figures fade away into the background and the “world” around them darkens as his usual colourful chaos gives way to a grey uniformity interrupted only by sparse lines and geometrical shapes, scratching the surface like skates on ice, without steering a set course but by marking the passage from the figurative to the abstract.

At his first solo show at Xippas Gallery in Athens, André Butzer is presenting both large-scale paintings and small size drawings in line with the science-fiction expressionism, often attributed to him.

André Butzer was born in Stuttgart, Germany (1973), and lives in Rangsdorf near Berlin. In 1996 he co-founded the Isotrop Academy along with about 20 other young artists and writers, which remained active with exhibitions and publications until 2000. Butzer has since organized a small series of group shows around the world under the name Kommando. He has a personal organization named FRIEDENS-SIEMENSE CO. dedicated to abstraction. Butzer’s recent (2008) personal shows include: Patrick Painter Inc., Los Angeles, USA, Gio Marconi, Milan, Italy, Metro Pictures, NY , Galerie Bernd Kugler, Innsbruck, Austria.