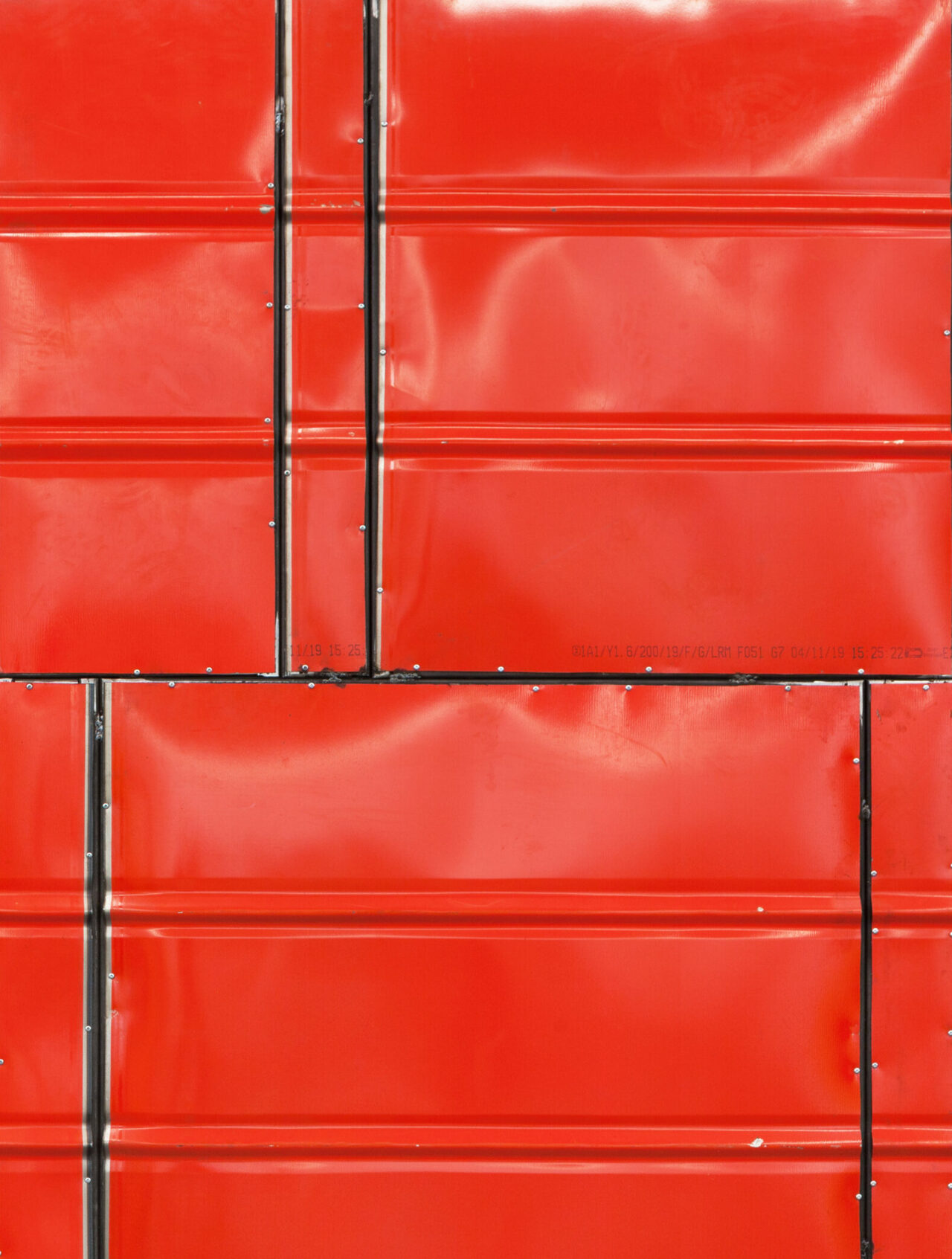 Kevin Rouillard was born in 1989 in Vendôme. He lives and works between Vendôme and Paris.

Kevin Rouillard creates installations and wall sculptures from large cans and containers that he flattens by hammering them. Sometimes he brings together sheets of metal that he welds together to create compositions which seem both complex and simple, since they are made with “poor” materials. Imposing but austere, they result from a process inspired by the logic of recycling.

First, Kevin Rouillard collects material which, in turn, is often recycled – indeed, the cans that have already become his signature-material are used in a thousand ways after their nomadic life as transport containers is over, and can be metamorphosed into plates or mobilised in architectural structures. Then, after having recovered the containers, he classifies, organises and transforms them. He brings them back to their ultimate purpose, subtracting them from the circulation of goods in the world.

This gesture of subtraction which encourages us to stop running against the clock, a gesture that leads us away from the consumerist logic of consumption, creates a bridge towards the aesthetics of Rolf Julius, who also “recycles” found elements, compelling us to focus on the environment, the context, as we slow down.

When Kevin Rouillard explains how he selects his materials, he specifies that his choice lies outside of any hierarchy. No one piece is privileged over another: all remain equal, purified of their context to become neutral. Even accidental traces that may remain on the surface – a logo fragment or a piece of label – lose their meaning. Persisting beyond any form of storytelling or narrative, beyond conceptualisation too, his pieces attempt to create a zone of pure contemplation in which one may truly encounter the work.

This vision results in a certain indifference towards the object as an object – there is no fetishism in the work of Kevin Rouillard. Rather, the object seeks to reach its limits, to become ambivalent. Is it a Duchamp-style ready-made? A sculpture? A diversion of minimalist or Color Field painting? Kevin’s work resists any categorisation and occupies a terminological interstice, inventing a new identity: “sheet metal, shock.”

Born in 1989, Kevin Rouillard as graduated with honors from ENSBA in Paris in 2014. He participated to the 60th Salon de Montrouge and to the prize of Villa Emerige (Empiristes) in 2015. The same year, he also won the Foundation François de Hatvany prize. In 2016 his work was included in the exhibition Distopark, at Confort Moderne in Poitiers, at Les Abattoirs, FRAC Midi-Pyrénées, Toulouse, at l’Assaut de la menuiserie, Saint-Etienne and at The Chimney, New-York, alongside with a group show with Centre d’Art Parc Saint Léger. More recently, following the SAM Art Projects prize received in 2018, the Palais de Tokyo in Paris is hosting its personal exhibition Le Grand Mur in 2020.