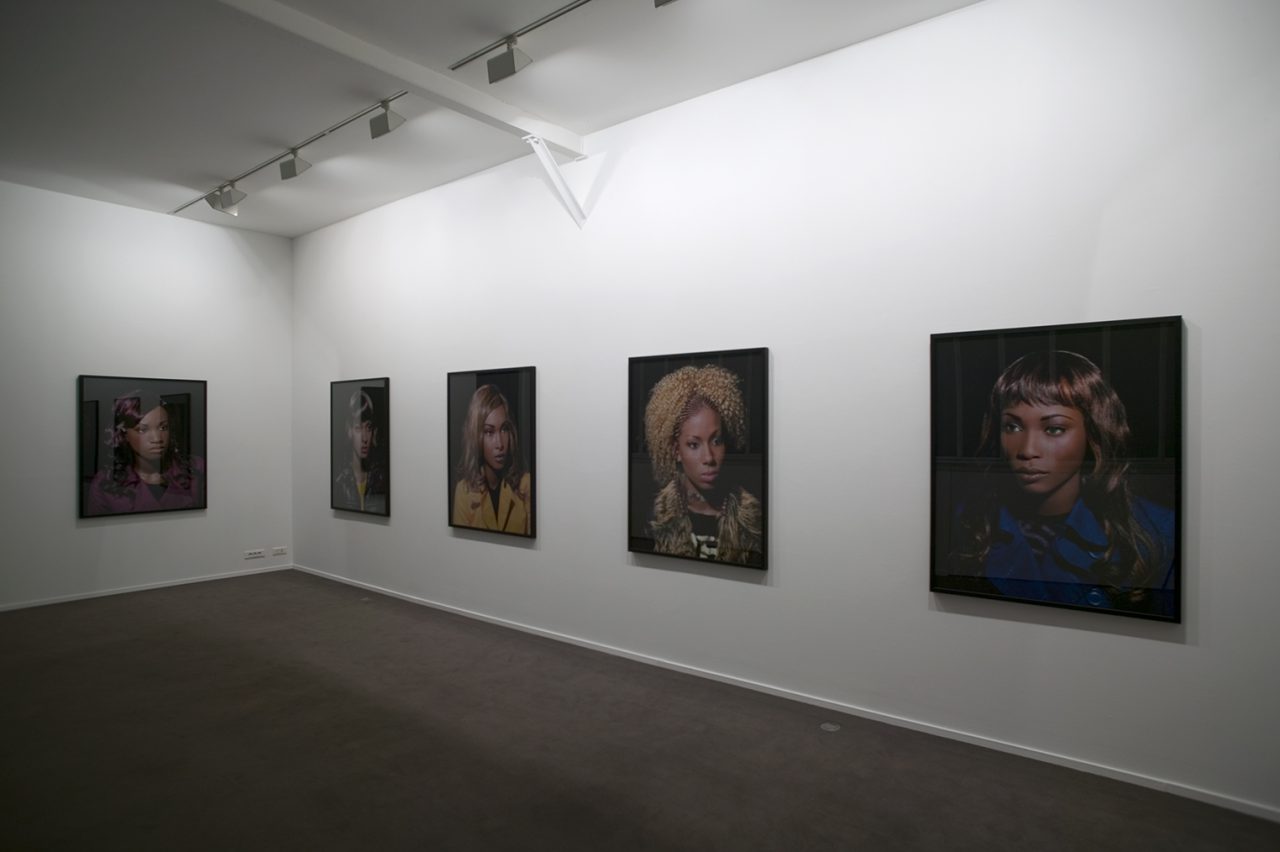 The first of the two new series shown in the exhibition is composed of twelve photographs of young models (New Faces). They were selected from the catalogues of different model agencies and include, with an equal distribution of gender, six pictures of young men and six of young women.
In contrast to the preceding portraits in black and white with their diffuse light, Valerie Belin has this time chosen to shoot with directional light and in colour. A single source of light is directed at the models’ faces, which seem to emerge from the absolute blackness of the background. This way, the faces and naked busts are illuminated, particularly emphasizing the skin and physiognomic features.

This series of portraits illustrates an aesthetic concept evoking that of avatars1 used in virtual worlds. The impression of being unreal is not only due to the excessive plasticity of the models, but is also generated by the conceptual and photographical operations the artist uses to produce meanings. By strictly delimitating areas of shadow and strong luminosity, the light is obliterating the fleshiness of the faces and bodies. By illuminating, in a way, just one face of the subject, the artist creates a spectral vision without substance. The treatment of colour, intentionally desaturated, produces a monochromic and diaphanous impression of the flesh that the eyes and the mouth colourfully counterpoint, like artefacts. However, this non-naturalist treatment of colour is not artificial: it rather evokes the coloration of a painted portrait in which the artist develops a vision. The skin, made up and powdered for the occasion, becomes a surface without blemishes, its perfection being more imaginary than real. Finally, the void of expression and the particular vacuity of the glances dictated by the poses contribute to transform human beings into chimera.2
The next series of photographs shown here is a continuation of the first one, showing seven portraits of young women “from the street” whose skin is black or of mixed colour, and whose faces are singularly beautiful and smooth. The artist seems to have used the same shooting protocol: strong light directed onto the subject, a black background, and a total lack of expression. However, it quickly becomes evident that the individual qualities of the person photographed lead to obvious stylistic differences between the two series. One could almost say that one series is the opposite of the other. Thus, the white and matt complexions of the models are in stark contrast to the brown and gleaming faces of the young girls.
In the same way, the diaphanous and “natural” nakedness of the first subjects, in which the colour was focussed on the faces (on the eyes and the mouth) is now substituted by a particularly artificial and colourful outfit which pushes the colours away from the faces.
This decor is not only referring to clothes (which we can guess are of cheap confection), but also to the hair (of synthetic material), to the coloured eye lenses and to the heavy make up. These attributes with their coloured harmony change from one subject to the next, just as a panoply on a standard doll (in this case, a black one).
In contrast to the anthropometric method which she imposed upon herself for her first series of portraits, Valerie Belin sees in her last work autonomous individualities who resemble only themselves, but who are all struck by the same uncertainty. The hairless and ethereal models are apparitions. The young black models, somewhat more concrete, seem to come from a mould and are oscillating between pure plasticity and humanity. The antithetical notions of presence and absence, living and unanimated, evidence and withdrawal, which are generally present in the work of Valérie Belin, this time seem to be condensed in a single principle of disincarnation, thereby raising the following questions: What does being alive mean today? And how do metamorphosis and the forces of destruction come into play?

1 In the Hindu religion, the term avatar is used in reference to incarnations of Vishnu; in a larger sense, avatar means metamorphosis or transformation. In computer language, avatar stands for the appearance or the image of a person in a virtual world.
2 A chimera can be the product of a fanciful imagination. See also phantasm, ghost, madness, illusion, imagination, mirage, dream, and utopia.

Valérie Belin was born in 1964; she works and lives in Paris. Since her first individual exhibition at the Xippas Gallery in 1998, she has regularly exposed her work in France and abroad. She is represented by Sikkema Jenkins & Co in New York and by Ulrich Fiedler in Cologne (Germany).
The foundation Huis Marseille in Amsterdam will exhibit Valérie Belin in September 2007, just as the Musée de l’Élysée in Lausanne (Switzerland) and the Maison Européenne de la Photographie in Paris in 2008.