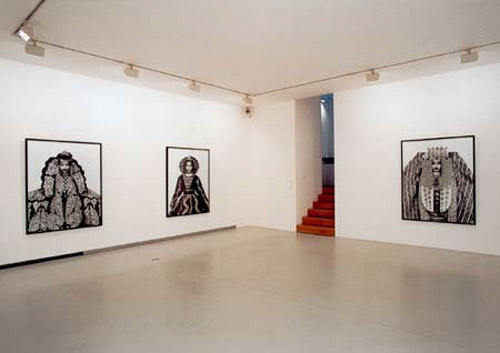 For her second solo exhibition at Galerie Xippas, Valérie Belin will present a new series of photographs of moroccan brides. The photographs were taken on site at marriages in France and Morocco.
The idea stems from Belin’s love for ceremonies, which can be seen in her earlier work, as with her series Argenterie (1994), where she photographs the ceremony of objects. With the moroccan brides, the artist was seduced by the the profusion and the decorative richness of the actual wedding and the dresses. She witnessed during the second night of the ceremony (which dures three days in all), the bride changes her dress seven to ten times. Belin discovered the variation of all the different styles and especially the ones that were extremely ornamental where the body was lost in the gown. The work has become a flat and abstract mélange of architecture and baroque that, at once, has erased all notion of perspective and volume. The artist reinforces the idea that photography is before everything, a surface of light.