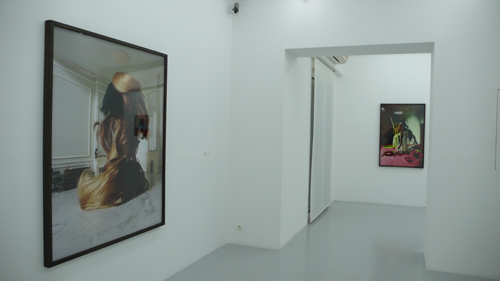 Mysterious and minute sculptural constructions, meticulously placed in indoor-space models, constitute the first stage in Petros Chrisostomou’s work. Chewing gum, coins, deflated balloons, plants, banana skins, candy and chocolate wrappings, are the raw materials for his compositions. He then photographs and enlarges these lilliputian environments and their strange residents to approximate a natural size.
The final result puts the viewers in a rather awkward position; confronted with an ambiguous reality they regress between familiar elements of everyday life and outlandish entities that dominate and impose themselves on the interior of buildings. Are they museum exhibits? Are they the extravagant decor of bourgeois residencies?

Or beings of unknown origin that have taken over working class apartments?

Is it reality or is it fantasy?

Petros Chrisostomou’s work reflects the social and cultural absurdity that characterizes our times, the confusion about evaluation criteria, the distorted perception of reality, the exaggeration in aesthetic choices. His compositions, although made of the humblest and most ephemeral materials, are suggestive and generate admiration, or even fear, while reflecting the decay and putrid foundations of what is nowadays ironically called high social status. Chrisostomou’s pictures are a humorous negation of high society’s origins as well as a parody of the contemporary social and cultural reality.