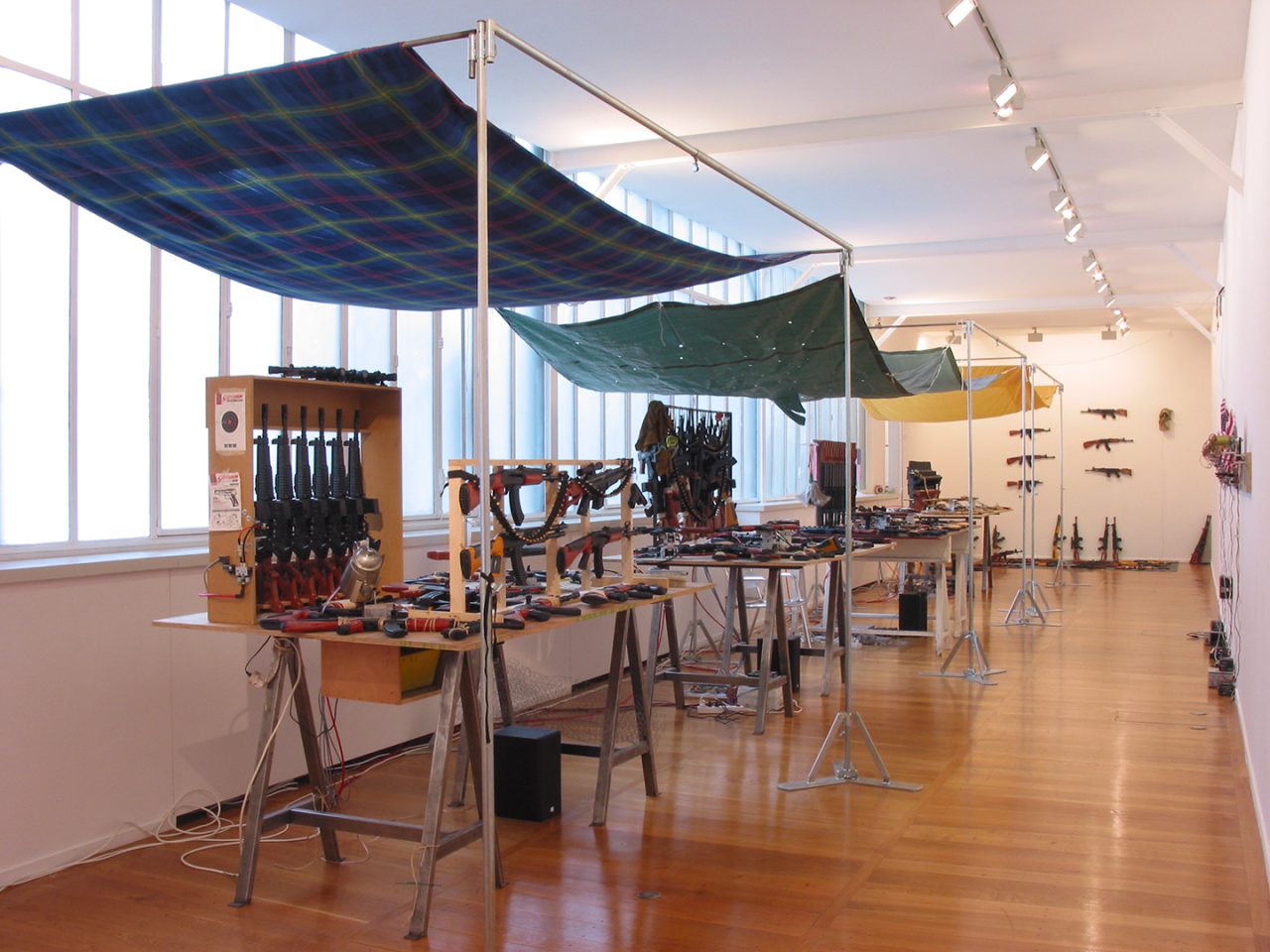 Galerie Xippas will present a new work entitled Nothing Domestic by the young Franco-Irish artist Malachi Farrell. This is the artist’s second solo exhibition at the gallery, which will run from September 12 – October 18, 2003.

Nothing Domestic is an installation of an arms market, made during the months before the US launched it’s war on Irak. Four large stands resembling a colourful market with toy copies of gun assemblages covering the tables, a presentation of the trafficking of the international arms trade. The stalls represent cultures of armament: Africa, the Middle East, USA, and Europe. Walking through the market, the public is asked to question it’s role as buyer and consummer.

The guns are controlled by hydrolic air pressure and motors that create robotic movements, and through computer programming combined with a soundtrack Farrell unfolds his narration on the issue in four stories (3 minutes 30 seconds each).

America needs war: From a backdrop of voices of dealers inviting visitors to buy arms to sounds of people saying «America needs war» and «America needs peace», US flags, representing crowds, wave and dance in rythym on an adjacent wall of the gallery. Some flags are presented up-side down to suggest public opinion against the war. Machine gun waltz: A ballet scene of machines moving to a Strauss waltz, an extract from the soundtrack of Stanley Kunbrick’s 2001: A Space Odyssey creates a contradictory atmosphere, where the machines are in control and man ‘s evolution is questioned. The Star Spangled Banner: Sounds of a voice chanting the national anthem, a tradition in American schoolrooms, changes to the «The Star Spangled Banner» by Jimi Hendrix illustrating the irony in blind patriotism. Free-style machine gun: A choreography of air sounds create an acoustical composition, transforming the shooting market into a musical experience.

Nothing Domestic is a work about the issues of armament-attraction to violence, the trade commerce, innocent deaths and the cultural differences towards the use of arms. The work is composed of cables, motors, hydrolics, water, infra-red, wood, steel, plastic, gold paint, fabrics, press clippings, computer chips, everyday objects, mp3 players and sound equipment.

This installation is generously supported by AFAA-Bureau des arts plastiques/French Embassy and is produced by The Sprengel Museum Hannover (June 11–August 31, 2003), Galerie Xippas, and The Gemeetmuseum, The Hague (November 22, 2003 – January 2004).
bined with a soundtrack Farrell unfolds his narration on the issue in four stories ( 3 minutes 30 seconds each).