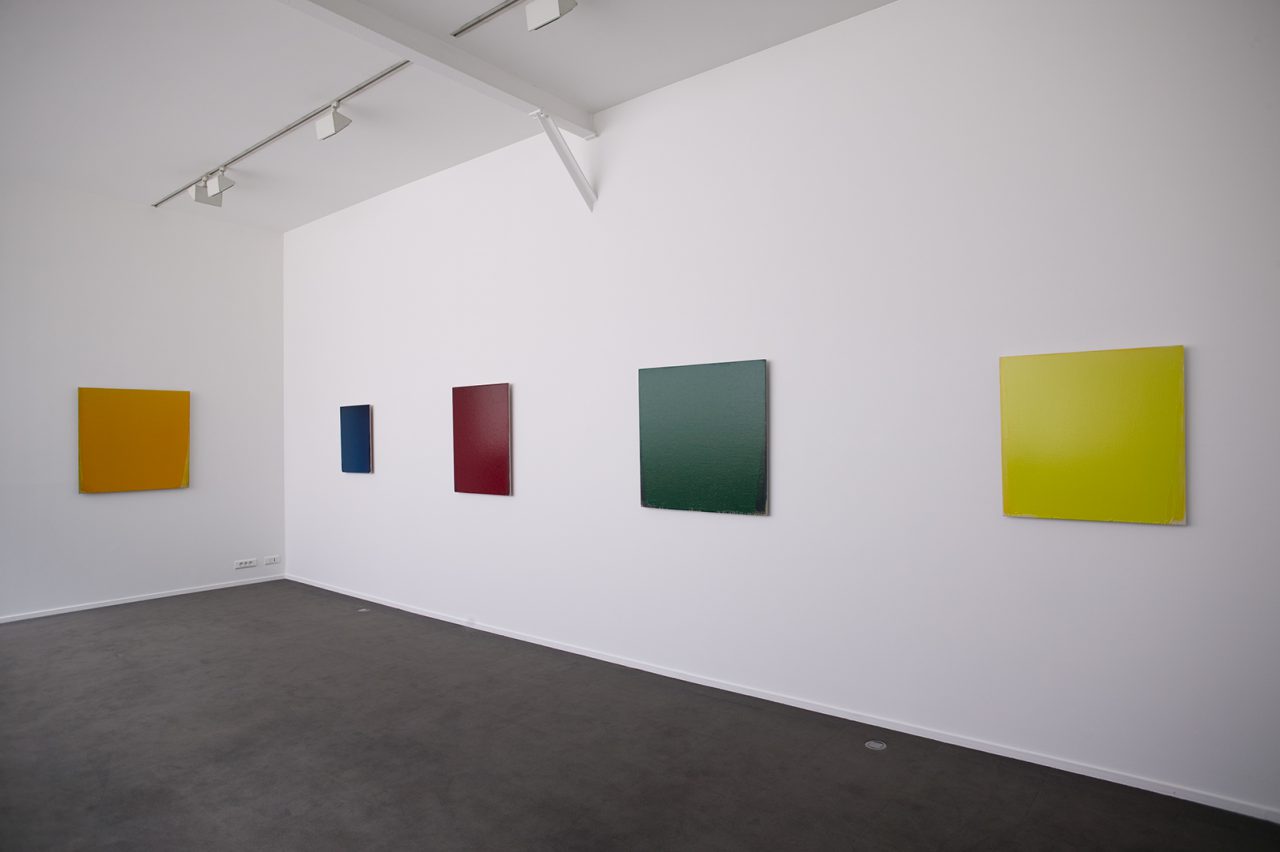 These works encourage us to experience the colour not as a simple surface but as a phenomenon delivered entirely to the viewer. Seemingly radical by their title and the process of their creation, these paintings display an undeniable depth and texture provoked by accidents, traces of running acrylic and by the vibrations of the colour, obtained by the superimposition of different coats and the play of transparency and translucence.

For this, his first exhibition at the Xippas Gallery, Joseph Marioni presents an ensemble of six paintings: Violet, Blue, Green, Yellow, Orange and Red Painting.
Of medium size and apparent rectangular shape, these canvases narrow at the base in a barely perceptible manner which accentuates the sliding effect of the paint. The purpose of this is to establish a logic and an equation between the supporting object (linen canvas) and the manipulation of the material (paint). Each painting involves a number of under-coats usually of darker uncontrasting colours.

On facing these works, the fundamental experience for the spectator does not wholly lie in the image but more in the perception of the distance between the image and it’s title. The work of Marioni is perhaps a pursuit, a double quest; for the representation of colour, or rather specific colours (those used as titles for his paintings), and for the representation of painting. Marioni’s work addresses questions of modernism specific to painting. What can a painting be after the advent of the camera, electricity and art history?

Joseph Marioni studied at the Cincinnati Art Academy between 1962 and 1966 and at the San Francisco Art Institute from 1966 to 1970. He has lived and worked in New York since 1972. It is in Europe most notably Germany, Switzerland and Austria, where his work receives most acclaim. In 1993, Kasper Konig and Hans-Ulrich Obrist dedicated a whole room to his work in the exhibition “The Broken Mirror“, at the Vienna Kunsthalle, while in the same year the Winterhur Kunsthalle in Switzerland gave him a solo show. He exhibits regularly at Rolf Ricke in Cologne, Mark Müller in Zurich and Nachst St. Stephan in Vienna. In 1995 he exhibited in the Baden-Baden Kunsthalle in Germany and in the Wiener Secession in 1996.
It is through the Peter Blum Gallery that Marioni’s work has become more widely known to the New York public. He has had two retrospective exhibitions; in 1998 at the Rose Art Museum in Brandeis University and in 1999 at the Colombus Museum of Art.