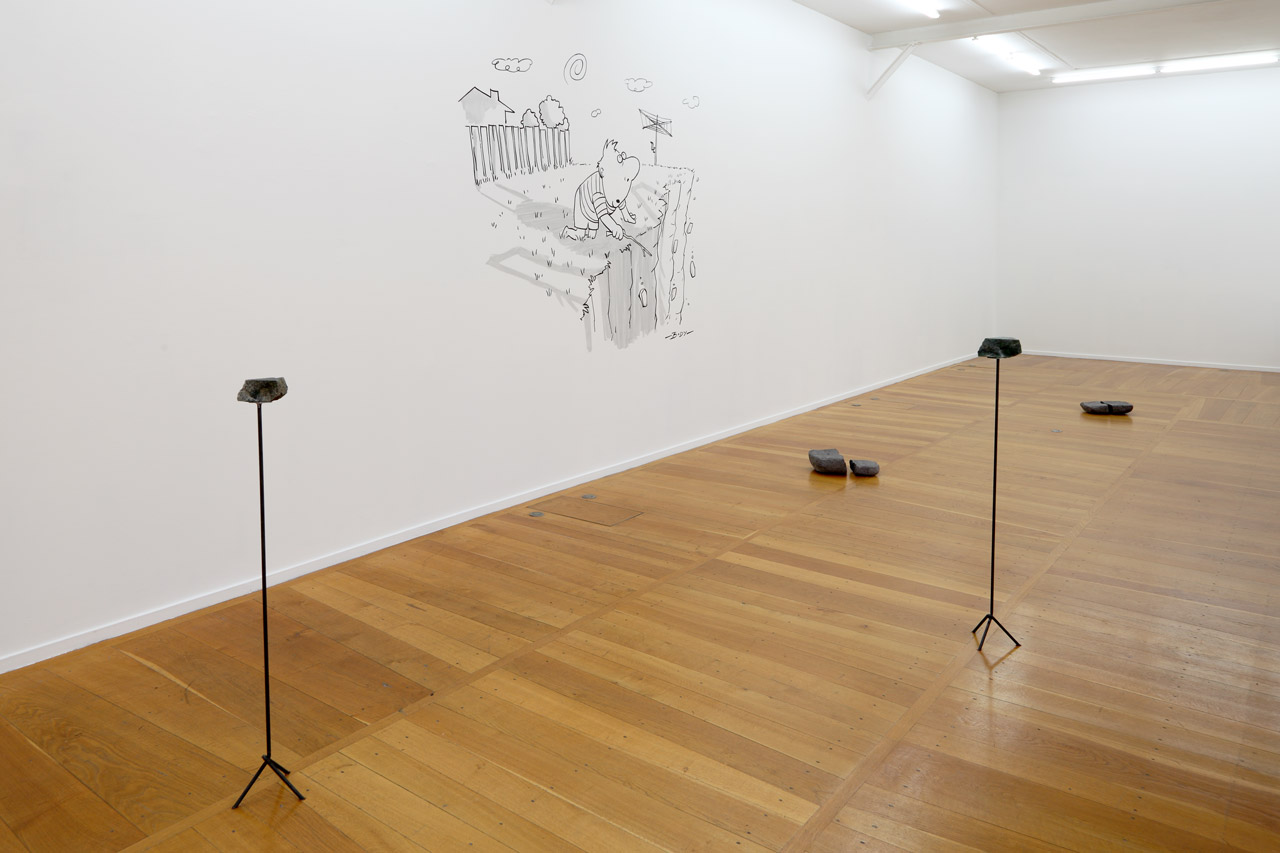 Jorge Satorre studied to be an illustrator before developing a body of work that investigates how we might apply thought processes and personal experiences during creative exercises or tasks. Satorre creates artwork that focuses on processes and action through a variety of mediums, such as drawing, video, and performance.

To investigate a specific place, the artist selects real situations, applies the carefully crafted lens of sociology, history, and geology, and transforms them into new and sometimes even imaginary ones. Here, the scientific methods of analysis flirt with the literary world and real-life facts meld with illustrations, rendering ambiguous the relations between text and image. In Jorge Satorre’s work, the scientific method is chock-full of symbolism. By manipulating reality, the artist instills uncertainty and rumors.

Invited to show at Artspace and Enjoy Public Art Gallery in New Zealand, Jorge Satorre interrogated two terms used by anthropologists: emic and etic. The emic approach studies the way local populations think whereas the etic approach stresses the outside observer’s viewpoint. In the same vein as his past works, Jorge Satorre begins with specific situations that are insignificant or abnormal in order to understand places and concrete realities, producing something akin to Carlo Ginzburg’s microhistory.

The artist has most notably focused on two local phenomena: the extinction of a certain indigenous bird species and the legend of the Haast’s Eagle. The first project consists of metal models of 51 birds that have become extinct. Inspired by the miniature lead soldiers invented in Germany in the 1800s, Satorre draws a parallel between playfulness and Colonialism – which is responsible for numerous ecological devastations.

His artwork focusing on the Haast’s Eagle draws on the Maori legend, which tells of a giant eagle named Hokioi who was capable of capturing people. A few bones from this animal were found on the Southern end of the island in 1871 and are now in a museum in Canterbury. These bones are the femur, the talon, and two ribs. The Australian eagle is thought to be the ancestor of the Haast’s eagles, which are about 10 to 15 times smaller. For this project, the artist chose to make clay reproductions of these three types of bones because this material shrinks 15% when baked. This group of artworks is particular because each reproduction is modeled from the inside of the mold, which causes a progressive decrease in the scale until the reproductions are the same size as the bones of the Australian eagles.

While working on these projects, Jorge Satorre invited two political cartoonists – Guy Body from New Zealand and El Fisgon from Mexico – to participate to the show. From the understanding that a political cartoonist acts as a gauge of social reality, tasked with the job of voicing a personal opinion derived from an event of popular interest; Satorre asked them to delve into their subjectivity and personal stories instead of asking them to comment on current social and political events. Again, Satorre reclaims the process without revealing intimacy. This exercice is mirrored in Satorre creating an ensemble of small drawings.

No matter what his point of entry is, Satorre revisits historical references and transfers them into the world of personal experiences in order to endow their narratives with any new potential interpretations and highlight our relationship with memories. This allows him to create a foundation for his work where an ordinary inquiry is transformed into a quest.

Jorge Satorre was born in 1979 in Mexico.His work has been exhibited in many museums and institutions such as the CA2M, Centro de Arte Dos de Mayo, Madrid, Spain (2013), the Crédac, Centre d’art contemporain d’Ivry, Ivry-sur-Seine, France (2012), the Museo Amparo, Puebla, Mexico (2011), the Musée d’Art Moderne de la Ville de Paris, France (2011), the Museum Boijmans Van Beuningen, Rotterdam, The Netherlands (2010), the Museo de Arte Carrillo Gil, Mexico city, Mexico (2010), the Frac des Pays de la Loire, Carquefou, France (2010), the Grand Café, Saint-Nazaire, France (2010) … Satorre’s work has been rewarded by the Premio Injuve (2007), the Project modality Prize and the Miquel Casablancas (2006) among others. Jorge Satore has also received the grants from the Spain Culture Ministery (2007-2008) and has been in residency in the Palais de Tokyo in Paris (France).