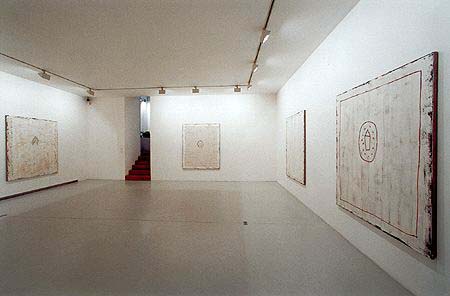 Galerie Xippas is pleased to announce its fifth exhibition of Joan Hernandez Pijuan, amongst one of the most important figures of Spanish painting. An Expressionist in his beginnings, the work of Pijuan has evolved through the years, shedding its leaves and revealing a preoccupation for volume and a desire to reinvent pictorial elements.
Overall, the 1970’s marks a reinvestigation in painting of new dimensions in the themes of landscape. At the forefront in Spain, Pijuan became more and more interested in the empty surface of his canvases and the relation of the object in this imaginary space. In his actual daily enviroment, he sees simple objects and gives them a new metaphysical existence. This was demonstrated in the series “Surfaces blanches” in his last exhibition at the gallery in 1998.

The delicate textures of the surface of the works are a result of layers overpiled by layers of oil paint, which can be seen at the edges of each canvas where the colors have given way to another hidden color. Light, movement, and color work together in a monochrome space. Other than his usual black and white, the most characteristic colors in he uses, the palette is restrained to ocre, yellow, pink, and green. The iconographic elements – a house, cypress, cloud, flower – appear isolated. They are reoccuring images in his paintings with strong emotions imbedded in the idea of opposites – empty and full, visible and invisible, trasparent and opaque. A motif is created by engraving the traces of earth in the material. He discovers the first layer by inscribing the drawing onto the canvas. Glidding and gratting his painters’tools, Pijuan shows us how the surface of the painting sollicts the physical body to be close to the experience : the exploration at first visual becomes quickly tactile and permits one to discover the cracks and sediments of forms. He demonstrates that it is no longer necessary for paintings to represent landsape or conceptualize space but the contrary, to transform the world more sensitive to our enviroment. The result of his pictorial experience is finally the silence : silence in its density and tone. Pijuan enterprets it as a topographic heritage – a way of looking, a sensitivity originating from his native Catalan, “the emotion of the absolute stillness of o summer day”.

Joan hernandez Pijuan was born in 1931 in barcelona. This year, he was nominated to the prestigious “Menbers of the School of Fine Arts of San Fernando” in Spain. His work has been the subject of many solo exhibitions among others “Sentimiento de paisage” at the Frankfurt Kunstverein, Germany (1999) and recently a retrospective of works on paper 1972-1999 at the Rupertinum Museum of Art, Salzburg, Austria (2000).