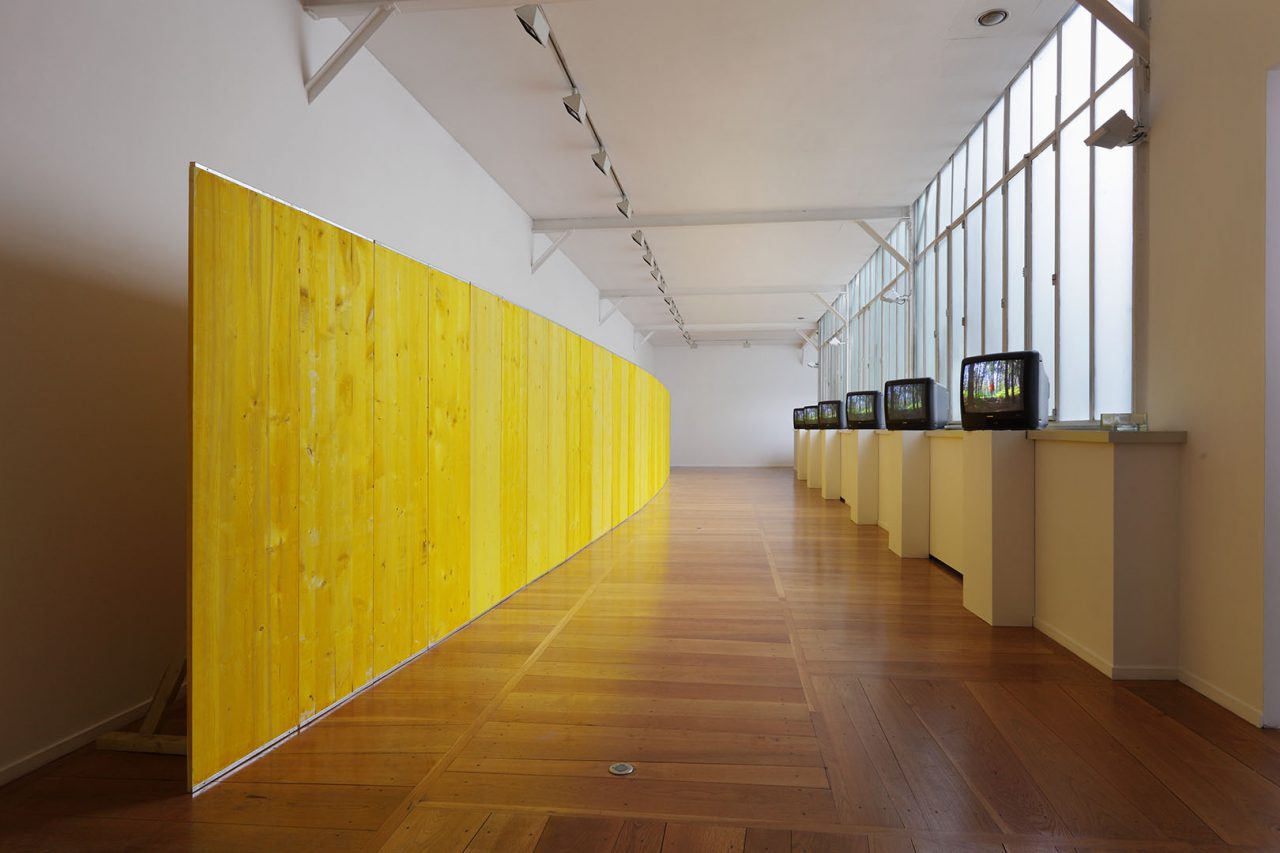 First exhibited in 2007, the Xippas Gallery is pleased to present Denis Savary’s second solo exhibition in its Parisian venue. Considered to be among the most important young Swiss artists, Denis Savary has recently shown his work at the Villa Bernasconi in Geneva, the Pasquart Center in Biel, Switzerland, and the Ferme du Buisson in Noisiel, France. Continuing in the vain of these projects, Denis Savary continues to investigate the very concept of an exhibition. The artist’s treatment of the exhibition space as a whole and his technique of blurring the formal and the theoretical gradually define an atmosphere that transforms the space and overwhelms the spectator.
At first glance, the work of Denis Savary is hard to pin down as he resists all classification and categories: he is at once a sculptor, a videographer, a photographer, an illustrator, a collector, an art historian, and a curator. In his work, decompartamentalization takes place at the level of the medium as well as through genres, references and collaborations.

Denis Savary pays attention. He comes across as an archivist of minutia and he shows, as if under a microscope, the intimate space of micro-events that are part of common occurrences: in a foggy landscape, a man cuts a tree branch with a chainsaw; a woman, seen from her back, guides us through a forest, her voice barely audible above the bird calls; and a man lingers at a bar in an empty night club. Denis Savary’s work employs a vocabulary of the ordinary: to be intrigued by everyday incidents and interested by micro-events is to collect pieces of reality and to endow these objects or moments that are a priori banal with significance and a meaning.
There is nothing spectacular in Denis Savary’s videos, which are often static shots of landscape where the characters are reduced to a single action in real time. Everything feels familiar and yet everything is incongruent. The spectator can’t tell if each element of these videos (which were filmed in locations either personally important to the artist or geographically nearby) has been staged, simulated or simply recorded – or if they were produced with surprisingly economic means. Manipulating the spectator’s state of uncertainty, the artist endeavors to leave the audience to find a place in the everyday for contemplation or even transcendence. Everything has been arranged to make us believe that we are experiencing a real moment, a happenstance, which the rest of his work appears to echo.

“Altering the flux of reality, making it overflow, imagining how it will split… » *
Through his immersion and saturation of the real, Denis Savary moves beyond it, turns it upside down, in order to push the spectator into a parallel reality. Here, the grotesque and the exotic dance in time, forming a poetry of the banal: a wooden fence becomes an abstract painting, a wall of nails looks as if it is waiting for a painting, a two meter high spring appears fragile, as if it is just about to fall. His manipulation of scale underlines the architectural elements of these objects and upsets the usual order of things: advertising panels find themselves inside a building in a long straight corridor, and the spring has become so large that the movement of the bounce, fundamental to the object itself, has become absurd.
Like the spring, other works by Denis Savary create a dialogue on a formal level as well as a conceptual level: they plunge the visitor into this particular atmosphere, and act as a sort of encyclopedia, where the pieces refer to one another. Denis Savary’s transfigurations lure the spectator into a version of daily life impregnated by art history, which the artist himself reappropriates, sometimes in a very frank manner. Directly influenced by “Alma” (based on the life-sized doll made for Kokoschka), Denis Savary displays the replica of a mask from James Ensor’s Ostende home in a small gallery – a space without exits and only slightly separated from the main exhibition spaces. By placing it on a sofa, Denis Savary preserves the original presentation of the mask and therefore plays with the intimate space of a studio, investigating the hidden face of creation and what it means to be a modern artist living on the fringe of society. At the end of the visit, a collage of the carnival mask, nonchalantly left on a common, second-hand couch, provokes confusion between genres; and the public space is confronted with an intimacy that borders on eroticism.

The artist plays with ordinary situations in order to create a mix of oddity and collective memory. He then confronts the spectator with a narrative infected with a certain mutable and shifting force, which can perhaps only result in questioning the spectator’s point of view and point of reference.

Denis Savary was born in 1981 in Granges-Marnand (Switzerland). He lives and works in Lausanne and Paris.
After graduating from ECAL (Ecole Cantonale d’Arts de Lausanne), he then began a residence at the Arques Studios, and then at the Pavillon at the Palais de Tokyo in 2006/2007. He participated in numerous group exhibitions: Enchanté Château,organized by Christian Bernard at the Claudine and Jean-Marc Salomon Foundation for Contemporary Art in 2005 and at the MAMCO in Geneva in 2006,Voici Un Dessin Suisse (1990-2010) at the Rath Museum (Geneva), Wind, Me Souffle entre les Images at Quartier in Quimper (France), and at the Printemps de Septembre in Toulouse in 2009 and 2008, to name a few.
His work was also shown in 2008 at the Jeu de Paume (Paris) and as part of the Satellite Program at Jénisch Museum in Vevey (Switzerland).
He is also the co-founder of the Lorenzo/Savary Company, which explores questions linked to the representation of set and prop design. Their shows and performances have been shown at the CCS in Paris, at the Printemps de Septembre in Toulouse, and also at the Theatre 2:21 in Lausanne.

* Denis Savary, extracts from an interview with Jean-Yves Jouannais, from a forthcoming monographic publication from Editions JRP Ringier.