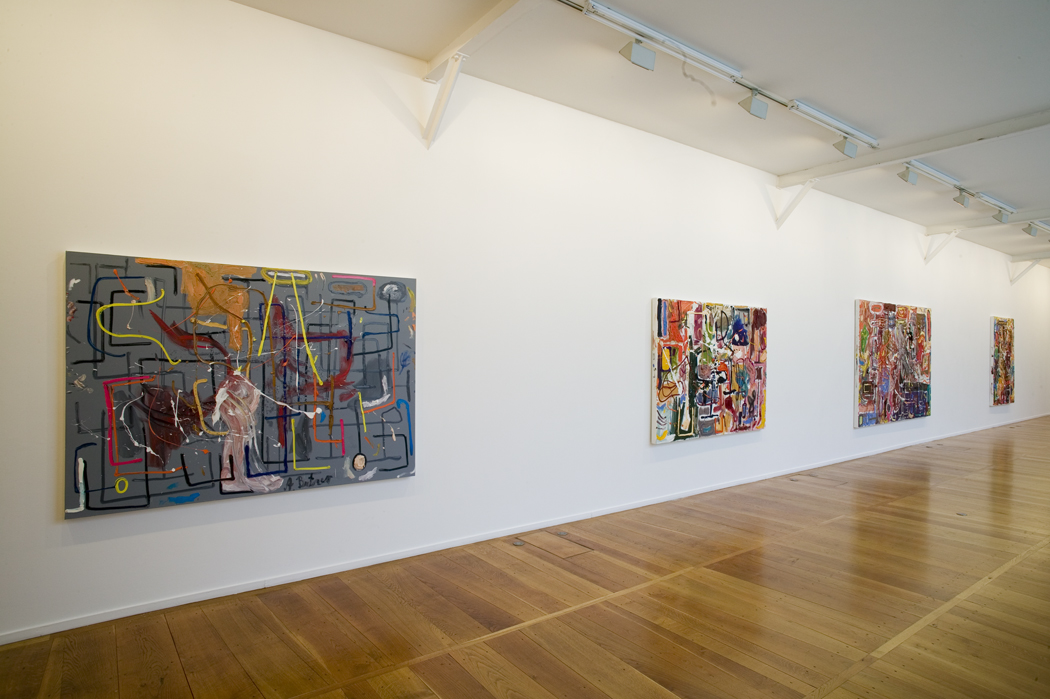 Galerie Xippas is pleased to present André Butzer’s first solo exhibition in Paris. André Butzer is an important figure in the young, contemporary German art scene.
The viewer’s first contact with André’s work is of a structure that seems archaic in which motifs are intermixed in a chaos of bright colors. Influenced by neo-expressionist German painting in the lineage of Albert Oehlen and Werner Büttner, André Butzer qualifies his work in his typical ludic manner as “science-fiction expressionism,” producing an artificial reality in which exaggerated forms verge on the outlandish. From the History of Art to the History of the State, from Munch, Pollock, Baselitz and National Socialism, from Seimens to Walt Disney, the rich language of signs and references culled primarily from American and German history, from contemporary and historical politics, from economic and social hierarchies, from industry to amusement, from technology to science-fiction, are diverse and myriad.
Galerie Xippas will exhibit six new paintings that tend towards the more abstract aspect of André’s work, distinguishing two main veins: one with strong color-blocking compositions of impasto paint and intense saturation of color redolent of Munch and Asger Jorn, and one in which elegant geometric patterns are overlaid on monochromatic grey backgrounds. These distinct styles are unified by and constructed from a very personal vocabulary of forms and figures that are recurrent, repeated. André Butzer’s earlier works represented a strange world peopled with figures inspired from cartoons, living in an imaginary land called Nasaheim, the conjuncture of Nasa and Anaheim, the peculiar town in Southern California built in the 19th Century by German immigrants to the United States nostalgic of their native land and thus using their own architectural vernacular; and the home of Disneyland. The figures issued from an invented mass culture and became deformed almost to an extreme in their embodiment of references and infinite allusions. In Butzer’s recent works, the figures tend to melt away into the background, leaving room for the “world” around them, and thus marking the passage from the figurative to the abstract.
André Butzer was born in Stuttgart, Germany in 1973. He lives and works in Rangsdorf near Berlin. In 1996, he founded the Isotrop Academy with four other artists and writers, which was active until 2000. André Butzer has since been organizing a series of group exhibitions around the world under the name of Kommando. He also has a private association called FRIEDENS-SIEMENSE CO. André Butzer has recently had a personal exhibition at the Nuremburg Kunsthaus, as well as solo-shows in Berlin at Max Hetzler and Guido Baudach, and has been included in many group exhibitions in Europe, the United States, Russia…. In 2008, he showed at Patrick Painter in Los Angeles, Metro Pictures in New York, Gio Marconi in Milan, Galerie Bernd Kugler in Innsbruck and Galerie Xippas in Athens.