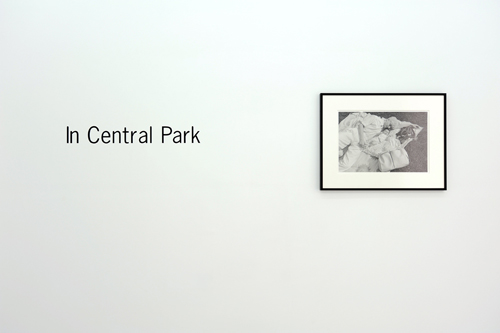 Tod Papageorge, Professor and Director of Graduate Studies in Photography at Yale School of Art since 1979, has influenced the perspective of hundreds of his students, some of whom now enjoy a preeminent position in the contemporary art scene. Among them we find Gregory Crewdson, Philip-Lorca diCorcia, Anna Gaskell, Katy Grannan and Abelardo Morell.
His personal path in the art of photography was influenced by Henri Cartier-Bresson, Robert Frank, Walker Evans and Garry Winogrand, the latter being a close friend. Always a partisan of black-and-white street photography, Papageorge seems rather sceptical about staged photography and opposes the recent trend for large-scale color prints.

In his first solo exhibition at Xippas Gallery in Athens, titled Here and There: Photographs of the Acropolis and Central Park, Tod Papageorge will exhibit representative images from the “Passing Through Eden: Photographs of Central Park” and “The Acropolis” series. The pictures of the first series were taken at Central Park between 1969 and 1991.The camera used was 35mm and medium-format, the latter producing photographs of fine detail and smooth texture. By seizing New Yorkers’ seemingly carefree moments of relaxation at the Park, Papageorge succeeds in capturing the full range of emotions, qualities, and manifestations of human life, whether beautiful or morbid, dramatic or entertaining. A similar mixture of irony and sensuality is seen in “The Acropolis” series, where Papageorge takes pictures of monuments and young American tourists in a state of harmonious union under the Attic light.

Tod Papageorge’s exhibition is part of the Athens Photo Festival 2008. Tod Papageorge will give a lecture at 8:00 pm on Tuesday, September 30, at the Hellenic American Union on 22, Massalias street. For more information regarding the exhibition please contact Xippas Gallery at athensgallery@localhost & +30 210 3319333,4. For more information regarding the Athens Photo Festival 2008 please contact The Hellenic Centre for Photography,15 Tsami Karatasou str,Gr-117 42 Athens, T +30 210 9210 545, E desk@hcp.gr, S: www.photofestival.gr

Mr. Papageorge began photographing during his last semester at the University of New Hampshire, where he graduated in 1962 with a B.A. in English literature. In 1970 he received the first of two Guggenheim fellowships in photography and, at about the same time, began his teaching career in New York City. He is the author of Public Relations: The Photographs of Garry Winogrand and Walker Evans and Robert Frank: An Essay on Influence, which were prepared in conjunction with exhibitions he curated for the Museum of Modern Art in 1977 and the Yale University Art Gallery in 1981. His work has been widely exhibited nationally and in Europe – the most recent exhibitions being at the Pace MacGill Gallery in 2007 and the Michael Hoppen Gallery in 2008 – and is represented in many major public collections including those of the Museum of Modern Art and the Art Institute of Chicago. A book of his photographs, Passing Through Eden, Photographs of Central Park, was published in 2007 by Steidl, and, this year, Aperture released another body of his work, American Sports, 1970, or, How We Spent the War in Vietnam. In 1979 Mr. Papageorge was appointed Walker Evans Professor and Director of graduate studies in photography at Yale University School of Art.